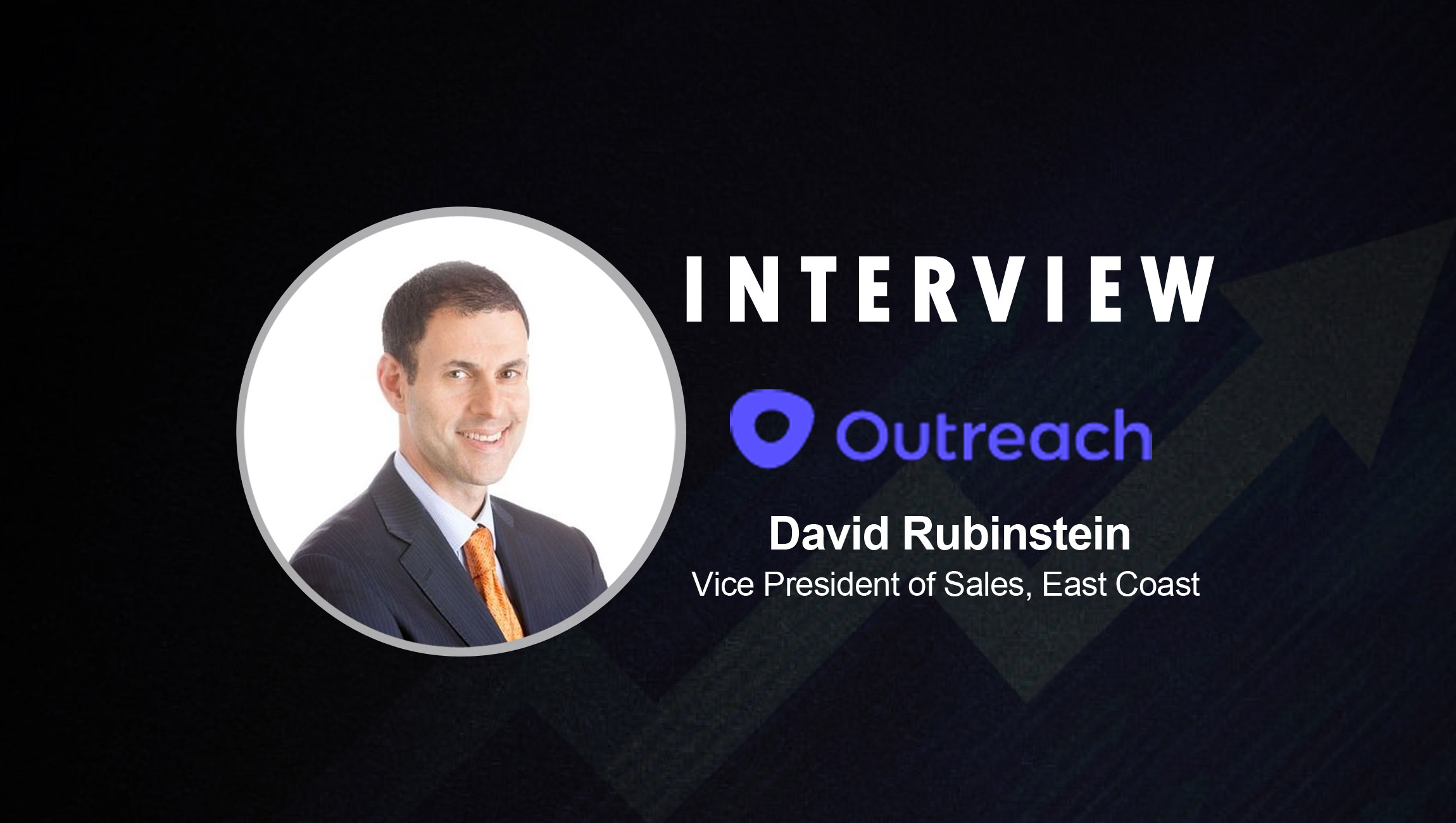 I’ve learned that asking great questions is much more important than delivering a great pitch feels David Rubinstein, Vice President East, Sales at Outreach.io in this interview where he talks about his journey in tech while sharing some interesting thoughts and tips on adjusting sales plans during a downtime. Catch the complete QnA:

Tell us a little about yourself David? What inspired you to venture into a tech/SaaS sales role?

I grew up on the East Coast, and after graduating Business School in Boston, I decided I wanted to get into tech. I moved to San Francisco, and I took a job as a product manager at a tech startup. I had a clear career path ahead of me – product manager, senior product manager and a product director. I was added to all these sales calls, and I really enjoyed being that smart generalist that would come in and help during the calls.

That moment was the turning point when my perception of sales changed. I realized that I didn’t like spending all my time in an office, and I really enjoyed being out with customers. I’ve always believed that when you change in your career you could pivot your industry or function, but you can’t do both at the same time. So, I decided I wanted to pivot on function. I started looking for companies that were similar to the one I was in, and I wrote to a CEO of one company pitching myself. A month later, I was in a new job. That was almost 20 years ago and I’ve been in sales ever since.

In your time in technology sales roles: could you talk about some of your biggest learnings and highlights?

Everything starts with the customer. When you go into a meeting, you need to understand what they want to learn, what problems they want to solve and what’s going on in their business. It has nothing to do with the product that we sell. No one cares that you know until they know that you care. You need to be really curious and understand how the companies that you work with make money – what are they going through in the current environment? That’s something that over the course of my career has only become more and more important with customers that we speak to.

I’ve learned that asking great questions is much more important than delivering a great pitch. When I think about the best sellers and sales leaders that I’ve worked with over the years, they’re the ones that can go into a meeting and frame the problem, not necessarily provide the solution, and those are the people that companies want to work with.

As far as highlights, I’ve been really lucky. I had the opportunity to work as employee number nine/head of sales at a startup called Expo TV. Being in a situation where you get to close the first deal with one of the largest consumer packaged goods companies in the world, when your company’s pre-revenue, that’s something that was incredibly exciting because it affected the entire company. I also worked at mGage, where I led sales. We were fortunate enough to sell the company to Blackstone, so going through an exit was a great experience. I’m also really proud that I got to spend six amazing years at a company like Salesforce. Being around the incredible leaders and people was just an experience that I’m very grateful for. Now I have the opportunity to take all of the things that I’ve learned throughout my journey and take it on the rocket ship that is Outreach.

How have you seen the typical role of the B2B technology sales executive evolve over the years? We’d love your observations on how you’ve seen the impact of the changing salestech landscape play a role here.

A decade or so ago, there were a handful of adtech or martech companies that each had their own specialties or filled a specific need in the market. Now, we’re in the thousands.

But I think the landscape also has so many more companies that are doing a little of everything. Every deal that I’ve been in, regardless of the company, usually has multiple other companies that are trying to win that same piece of work. It’s no longer enough to go in, show what you’ve got, get someone excited, solve their problem and close the deal. Now, you also have to show why your company is uniquely qualified to earn the business. Not just why they should buy a product, but why they should buy yours specifically.

Read More: What Can Sales Leaders Do To Lead Their Teams Through A Crisis

How would you advise technology marketers and sales teams to pivot their strategies and plans given the current business challenges due to the Covid-19 pandemic? What should they be doing as part of their revised strategies to help business continuity?

There’s not a one size fits all, but I think the general rule, especially right now, is to lead with empathy and listen. Another important point to understand is where the customer’s company is in this journey – is it in survival mode, in the middle and managing, or on the other end of the spectrum and thriving? This is more of a new kind of question but understanding upfront where the company is in this continuum will help you understand how to steer the conversation. If somebody says they’re in survival mode the next question should be “how can I help?”

Salespeople need to be cognizant of the effects of the pandemic and the resulting economic downturn. On top of that crisis, we’re seeing another crisis of civil unrest across the country. And all these moments are opportunities to show up, be empathetic, actively listen and learn.

What are the biggest takeaways you’d share with sales teams the world over (who are now forced to be remote) /frontline sales executives given the current world situation and related challenges?

Trust has never been more important than it is today. We have customers who are literally inviting us into their homes, which is a much bigger ask than ever before.

On the selling side, we’re now actually getting more access and more time to be in front of customers. It just happens to be on a screen. So the opportunity to make more connections with customers is there, and that’s pretty powerful. On the sales leader side, it used to be very easy to pop over to someone’s desk and talk to a team member. You could inject yourself into a situation or learn about a deal from overhearing it. In the world we’re in today, the only way that you’re involved in these situations, is if you have team members who are running toward you and trusting you as a leader who can add value. They have to trust that you have their best interests in mind, and that you’re going to try to help them.

In terms of developing that trust, I discuss core values in my first meeting with each team member. I let them know what’s important to me inside and outside of work and steps I take to align the two. I ask them to share their values as well. It’s important that we know what’s important to one another.  We work a ton but it’s important that we help each other find fulfillment outside of work too.  These conversations early hope help build a foundation of trust.  On the sales side it’s important to show empathy for where the customer’s company is in this journey – is it in survival mode, in the middle and managing, or on the other end of the spectrum and thriving? This is more of a new kind of question but understanding upfront where the company is in this continuum will help you understand how to steer the conversation. If somebody says they’re in survival mode the next question should be “how can I help?”

Salespeople need to be cognizant of the effects of the pandemic and the resulting economic downturn. On top of that crisis, we’re seeing another crisis of civil unrest across the country. And all these moments are opportunities to show up, be empathetic, actively listen and learn.

Tag (mention/write about) the one person in the tech/startup/salestech industry whose answers to these questions you would love to read!

I’d love to hear from Jeff Weiner. He and I worked together at Yahoo. Just hearing him speak, and the vision that he had, you could tell how smart he was. And, the way that he grew LinkedIn was unbelievable. Even toward the end of his time as CEO, as much as he rose in prominence, he was still right there on LinkedIn answering questions, chiming in, meeting with people and staying connected. It’s very impressive that he’s able to mesh all these responsibilities together so seamlessly.

Books: Selling Above and Below the Line by Skip Miller and Sales EQ by Jeb Blount.

Tell us about some of the top sales/salestech/fintech/ other (virtual) events that you’ll be participating in (virtually, given the current global pandemic) (as a speaker or guest!) in 2020!

Given the constantly evolving nature of events currently, this part is still in the works. That said, Outreach goes to Dreamforce every year, and I’ve attended for the past six years, so it’ll be interesting to see how Salesforce will reimagine such a massive event in a virtual setting. Outreach most recently did the same thing for its annual in-person conference and rolled out its inaugural Unleash Virtual Summit, which welcomed thousands of sales professionals online, so it can be done.

We’d love to know a little about your future plans!

We’re hiring a ton in New York and will be opening a New York office. Of course, given the current state of affairs, we’re balancing our excitement with awareness of where we are and what is happening in New York City. We’re temporarily holding on opening a physical office and will only do so when it’s considered safe. That said, I’m really excited to work with the new team and help everybody not only hit their targets but also achieve their professional growth objectives this year. 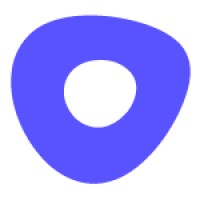 Outreach is the leading Enterprise ready Sales Engagement Platform, accelerates revenue growth by optimizing every interaction throughout the customer lifecycle. The platform manages all customer interactions across email, voice and social, and leverages machine learning to guide reps to take the right actions.

Also Catch, these latest episodes of the SalesStar Podcast!

Yellowbrick and iCEDQ Partner to Provide…