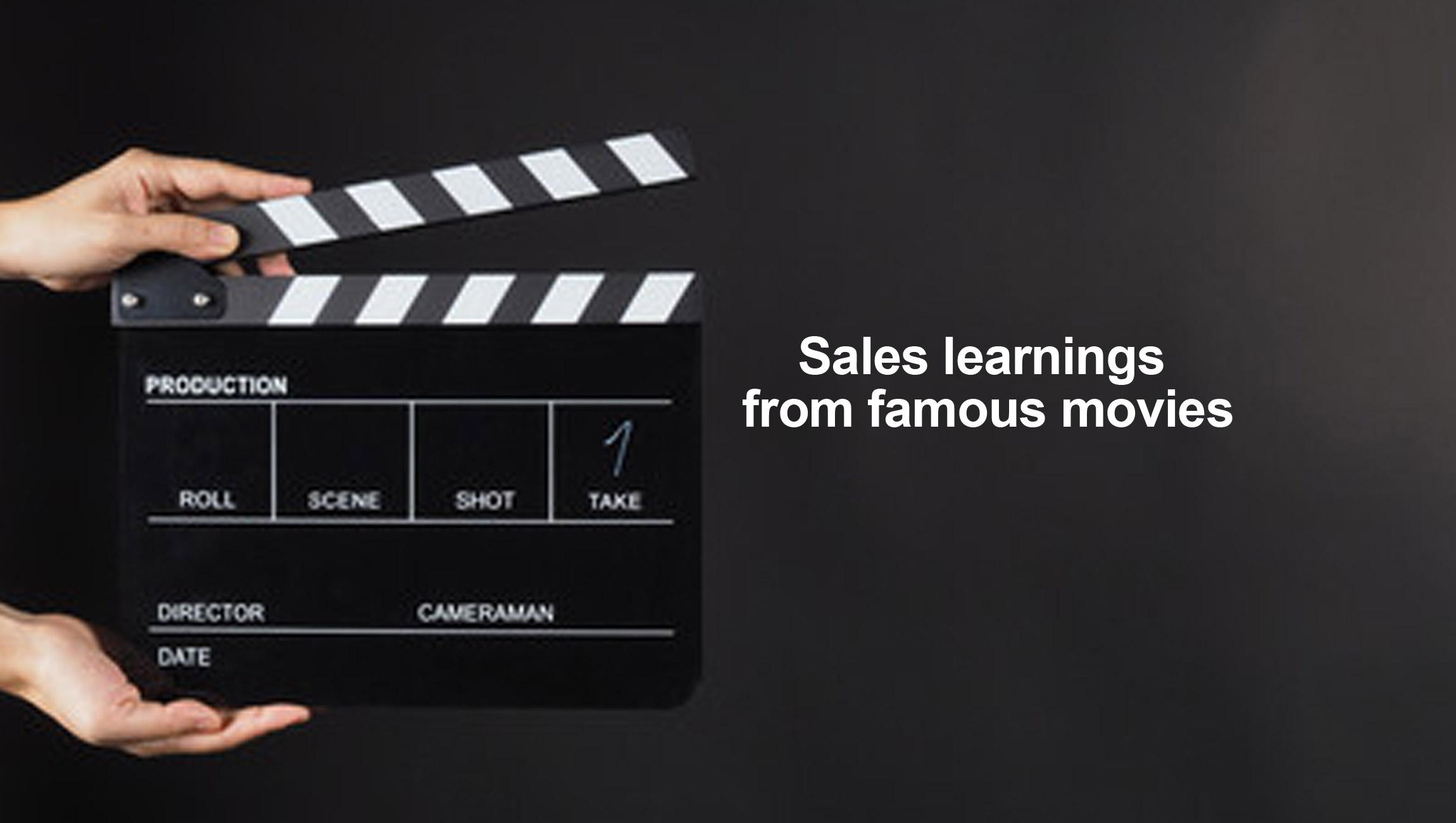 What Can You Learn from These Blockbusters?

Some of the greatest movies have helped impart key life lessons, in fact, several leaders do feel there are still a lot of inspiring movies to draw interesting learnings from. In today’s always-on digital world, with constant access to streaming networks like Amazon, Netflix and the sorts, it’s that much easier to pick some more relevant marketing and sales learnings that can help build better leaders in SaaS and Tech or just to draw some daily inspiration from!

In this fun read, let’s take you through some interesting sales learnings that these 5 blockbusters can help impart:

The Pursuit of Happyness

Will Smith starrer of 2006 – The Pursuit of Happyness, portrayed Will as a homeless salesman. The story covers the struggle of the character Chris Gardner as a single father as he tries to overcome being homeless and having no steady line of work while trying to look after his young son. The movie is based on Gardener’s actual struggles of being homeless and can teach viewers (and salespeople!) a lot about persistence and how crucial it sometimes is to be open to starting over in a new line of business if the one you’re in doesn’t work. The story follows Chris (Will Smith) as he welcome a new stockbroking opportunity at an internship level, although this sales role was unpaid, Chris develops new ways to make sales calls more easily (back then, they didn’t have the luxury of sales automation technologies!) while reaching out to high potential clients in order to earn a better stock broking (and paid) position in the company.

The movie is definitely a must-watch for SDRs who haven’t caught it yet, because it can teach sales team across the typical technology sales hierarchy a lot about being creative and knowing how to be focused on a core goal despite the many business and personal challenges that might come in the way.

The first instalment of this science fiction drama film that involves scientists visiting a still-to-be-completed safari / amusement island park of genetically engineered dinosaurs for a weekend was always a good source of entertainment since its release in the early 1990s. While there were several series made on this theme thereafter, the biggest learnings that the first instalment can portray for today’s sales teams -> There is still an importance of a strong product demo but given that cost incurred to build out a test product, today’s sales, product and marketing leaders can significantly capitalize on enhancing their product demos and portray the best of their services and features using a range of virtual reality and immersive experiences!

There is no dearth of video tools and augmented reality solutions to help sales and marketing teams to improve how they present what their concept or product can do for the prospect or customer. While showing an actual sample by building a beta version is useful in many cases, today’s business environment, with restricted face to face meetings have implied that customer facing teams (not just sales and marketing teams) have to be more open to enhancing how they communicate with their prospects and customers using the most relevant sales technologies and marketing technologies.

Hilary Swank starrer Million Dollar Baby directed by Clint Eastwood  is the story of an amateur boxer as she pursues her dream of becoming a professional boxer. In the film, when Hilary (or as the character played in the movie – Margaret “Maggie” Fitzgerald) approaches Frankie Dunn, the trainer (Clint Eastwood), he initially refuses to train her.

But Maggie’s dream inspires her to keep her eye on her goal and work out everyday, tirelessly in his gym despite the fact that Frankie seems to think she’s too old to begin a boxing career leave alone be a professional at it.

In several conversations with sales leaders, we’ve seen how many of them have changed careers (sometimes much later in their journey) but they’ve still thrived in their new roles. With the right sales technology (well, obviously!) and the right tactics (if taught by mentors you trust), anyone can learn how to sell and climb the ladder, eventually. The most important criterion revolve around having a key focus of your own and a goal to fight for.

Rocky Balboa’s rags to riches story that takes viewers through his journey from Philadelphia’s slums to becoming a world heavyweight champion may not need an introduction for many of you! The critically acclaimed film not only solidified Sylvester Stallone’s career the movie business, it was (and still is) often considered one of the best sports films ever made. The film has spawned several sequels over the years, but some of the greatest (sales) learnings that one can take away from it -> your background in sales or your background in general, doesn’t matter.

To power through and achieve, it’s more important to enlist the right (sales) trainer – much like Rocky eventually does in the movie sequels, and team yourself with the right tools to scale your efforts in a shorter timeframe!

This 2008 British drama film which is a loose adaptation of the novel Q & A (written / published in 2005) by Indian author Vikas Swarup tells the story of 18-year-old Jamal Malik from the slums of Mumbai and how he surprises everyone by answering every question correctly in an episode of Who Wants to be a Millionaire. Although Jamal is eventually accused of cheating, the movie takes us through his growing years and childhood difficulties while showcasing the biggest life learnings he grasped from every obstacle he faced – from sleeping on the streets to serving tea for a living. Without a fancy education (or like we’d say in tech – without a fancy tech degree or marketing / sales degree!) he used his life experiences and alert observations to eventually garner the correct teaching and learnings on his own, thereby surprising everyone on the show when every question was answered correctly without any formal education.

The Best Ways to Push Better Sales and Marketing Outcomes in 2021? Be More Creative and Strategic. Catch more from these SalesStar Podcasts: