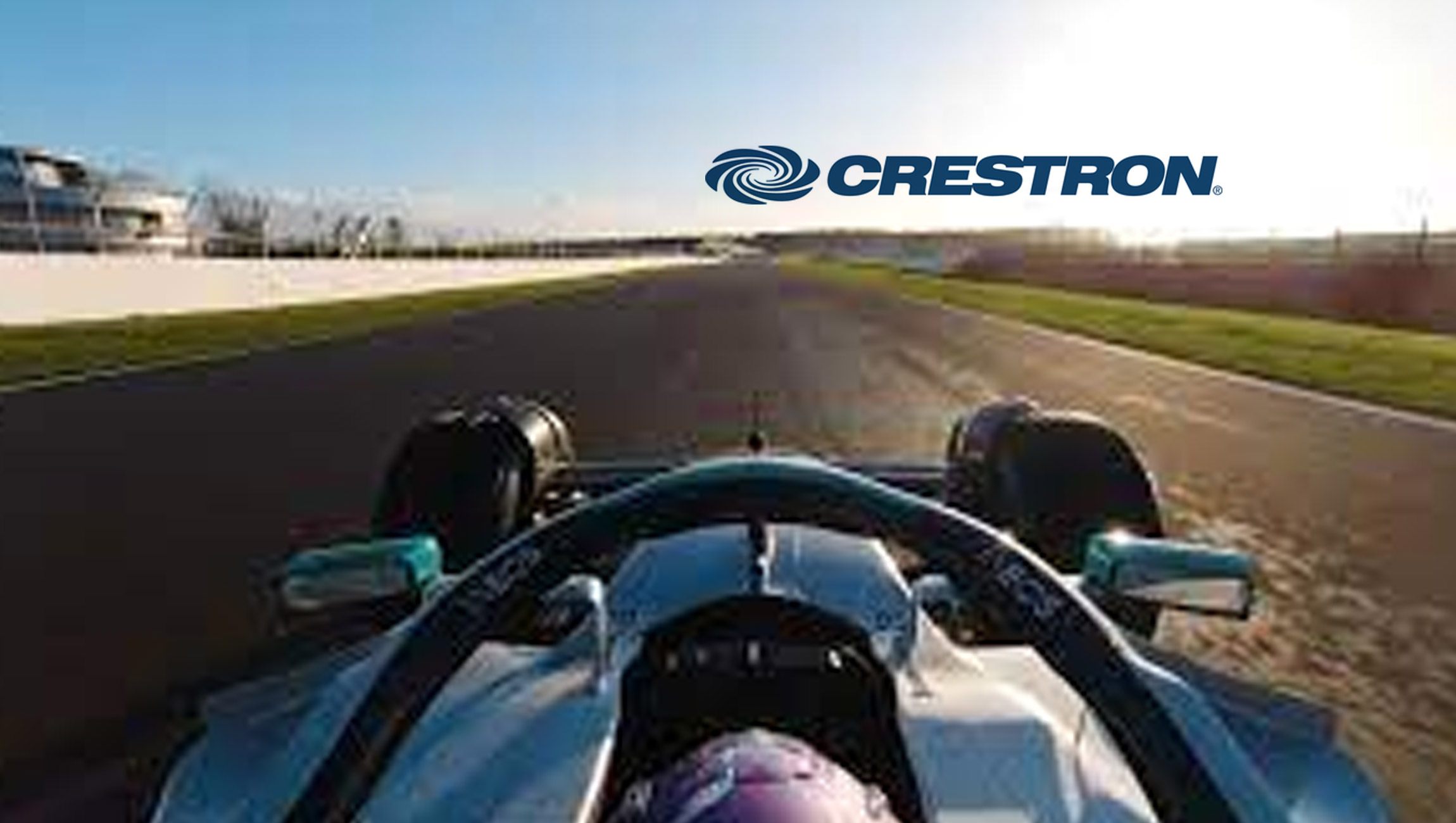 Crestron Electronics, a leader in workplace collaboration solutions, proudly announces the sponsorship of the Mercedes-AMG Petronas Formula One™ Team as a Regional Partner for all North American races, beginning with the Miami Grand Prix on May 6th. The partnership began when Crestron® technology was installed throughout the Mercedes-AMG Petronas Formula One Team headquarters in Brackley, United Kingdom, a state-of-the-art technology center for the design and development of the team’s F1 cars.

“We both want to maintain a frictionless experience. Anything that slows down the collaboration process leads to diminished performance on the track, so we’re proud to provide solutions that reliably enable immediate meeting experiences from the factory, the paddock, debrief rooms, or anywhere collaboration happens.”

Though video conferencing has been a factor in F1 racing for quite some time, it exploded during the pandemic and the increased adoption of hybrid work. The Mercedes-AMG Petronas Formula One Team was well prepared for this transition, having integrated Crestron room control systems including Crestron touch screens and DM NVX® AV-over-IP technology into Brackley facilities.

In order to more fully support a corporate culture built on immediate, in-person communication, the Team installed Crestron to further equip their tens of meeting places and over a thousand employees with frictionless collaboration solutions that prioritized performance and reliability. Engineers, designers, IT teams, pit crews, factory technicians, business operations teams, and executives used the Crestron Flex Digital Workplace platform for video conferencing throughout the 2021 Formula 1™ season, in which unprecedented innovation and engineering helped the team break already impressive records.

“One of the main reasons we chose Crestron was they were synonymous with meeting room technology. That proved to us that not only did they have a track record of past performance, but also that we could rely upon them as an innovative partner for the long term,” shared David Cadywould, Head of Core Technology for Mercedes-AMG Petronas Formula One Team.

Performance is paramount in the world of racing, especially with regard to video collaboration technology. For World Championship-winning teams like Mercedes F1, collaboration technologies must provide both speed and reliability so that when people walk into meeting spaces everything works straight away, regardless of how many people are participating or where they are joining from.

“There are times when our senior engineering community will fly straight from one race location to the next without returning to the UK, and that’s exactly where the link between the track and the factory is so critical,” said Cadywould. “Following each of the race events, there are a series of race debriefs where an immense amount of information and data gathered at the track needs to be disseminated to the factory and around each department of the business, and we can’t afford any lag time.”

“Crestron and the Mercedes-AMG Petronas Formula One Team are both high-performing teams with an intense desire to deliver excellence and we’re thrilled to play a role in their success, whether that’s through cutting edge technology or sponsoring the team across the series of North American events,” said Brad Hintze, executive vice president, global marketing for Crestron. “We both want to maintain a frictionless experience. Anything that slows down the collaboration process leads to diminished performance on the track, so we’re proud to provide solutions that reliably enable immediate meeting experiences from the factory, the paddock, debrief rooms, or anywhere collaboration happens.”

“Crestron was the right way to go based on the fact we’ve used their technologies for quite some time, and it’s always been reliable. We talk about performance quite a lot, being the type of team we are, but it’s actually reliability that we chase and that makes some of our decision making quite straightforward,” concluded Cadywould.

Today at 2:30 pm E.T. Crestron will be presenting the Mercedes-AMG Petronas Formula One Team case study during the Digital Workplace Experience 2022 event presented by Reworked. Crestron is proud to be an official sponsor of the Mercedes-AMG Petronas Formula One Team in North America. You can enjoy the races beginning with the Miami Grand Prix on May 8th, the Canadian Grand Prix in Montreal on June 19th, and the United States Grand Prix in Austin, Texas on October 23rd.

Offerpad to Expand Into Five New Markets This Year, Bringing Its Convenient Home Buying and Selling Solutions to More Homeowners Across the Country