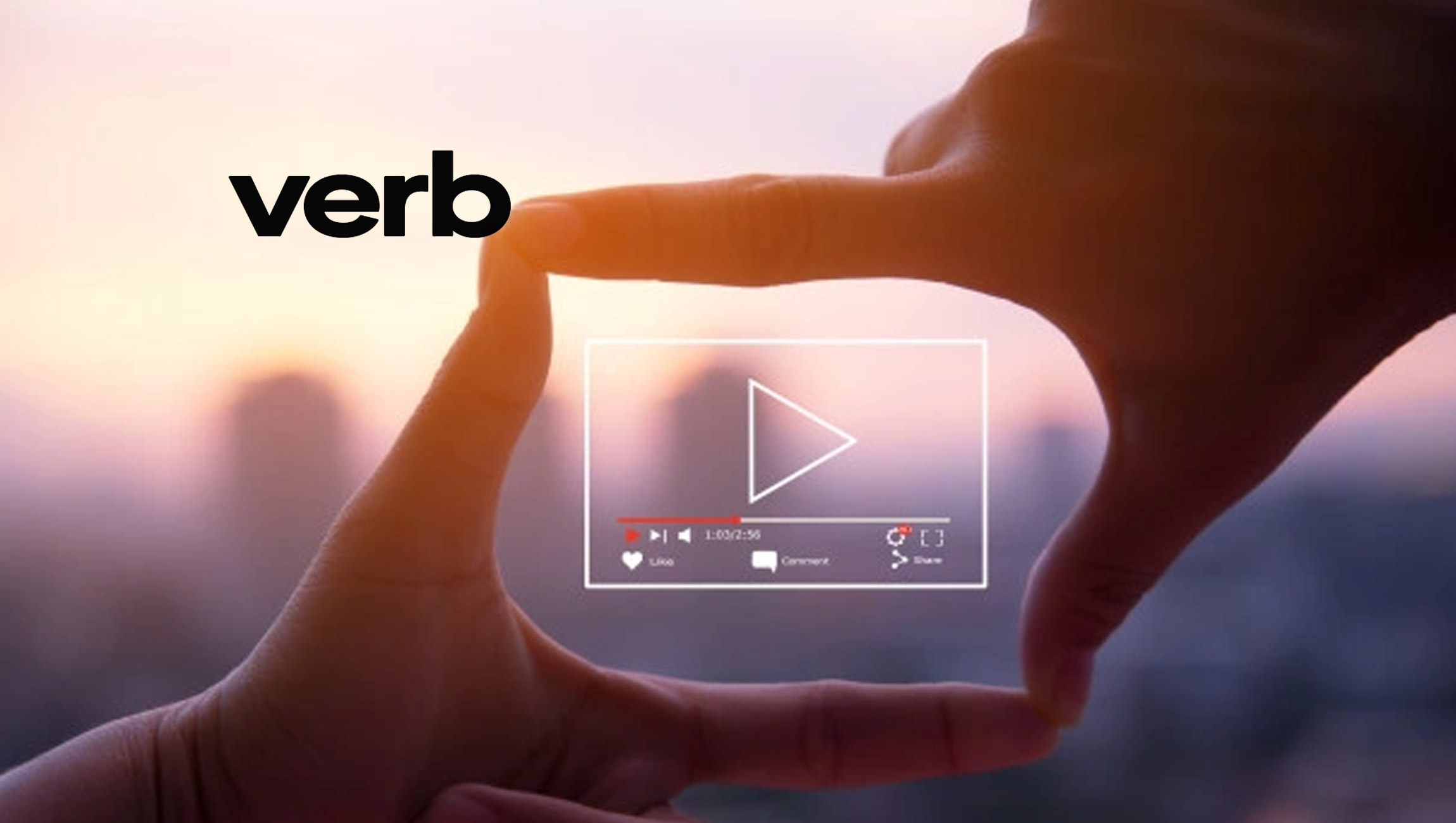 verbTV, an extension of VERB’s online shopping destination Marketplace, is an online TV channel with interactive, shoppable entertainment content that allows viewers to click, shop, and perform numerous other interactions directly through the video

Verb Technology Company, Inc., the leader in interactive video-based sales enablement applications, including interactive livestream eCommerce and shoppable video, webinar, CRM, and marketing applications for entrepreneurs and enterprises, today announced that the Company has entered into an agreement with David Meltzer to serve as an executive producer at verbTV, the shoppable entertainment extension of VERB’s livestream shopping destination, Marketplace (codename).

Currently the CEO and Founder of David Meltzer Enterprises, Mr. Meltzer is also co-founder of Sports 1 Marketing, a global sports and entertainment marketing agency and one of the world’s most successful sports marketing firms that leverages over $20 billion in relationship capital and over 38 years of business experience, bringing athletes, celebrities, and businesses together to “make a lot of money, help a lot of people, and have a lot of fun.” He was the former CEO of the renowned Leigh Steinberg Sports & Entertainment agency, which was the inspiration for the movie Jerry Maguire. Considered one of the top e-sports entrepreneurs and investors, Mr. Meltzer is also a three-time international best-selling author, a Top 100 Business Coach, and host of the top entrepreneur podcast, The Playbook. He has been recognized by Variety Magazine as their Sports Humanitarian of the Year and awarded the Ellis Island Medal of Honor.

verbTV is an online ecommerce channel providing viewers with a slate of shoppable and interactive entertainment programming. verbTV viewers will be able to click directly in videos to purchase products they see featured in the videos among many other engaging interactive capabilities.

As an executive producer at verbTV, Mr. Meltzer will produce content for VERB’s shoppable entertainment channel. The first among many verbTV programs in development will be Season 3 of “2 Minute Drill,” a reality TV competition created and hosted by Mr. Meltzer, Seasons 1 and 2 of which are currently available for viewing on the Bloomberg Television Network and Amazon Prime Video. Every episode of 2 Minute Drill features five entrepreneurs competing for $50,000 in cash and prizes with only two minutes each to persuade a panel of judges that their business pitch is the best. The judges/mentors, themselves successful entrepreneurs, provide insightful advice to help contestants strengthen their brands and pitches. Bringing the shoppable version of 2 Minute Drill exclusively to verbTV adds a new dimension to the entertainment experience, as viewers will now be able to participate in the program by purchasing the products and services offered by the contestants’ companies, among many other empowering interactions made possible by VERB’s state-of-the-art interactive video technology. In addition to 2 Minute Drill, Mr. Meltzer is expected to develop shoppable, interactive programs centered around e-sports as well as a shoppable version of Season 2 of Mr. Meltzer’s new TV show “Office Hours,” the first late-night entrepreneur talk show that features the best and brightest entrepreneurial minds from business, sports, and entertainment to talk about success, failure, and everything in between (Season 1 premiers on Bloomberg TV and Amazon Prime Video on Friday, October 15, 2021).

“I am thrilled to work with Rory and Team Verb to be part of the force ushering in this exciting new evolution of online ecommerce, and deliver the true convergence of pure entertainment and shoppability,” states David Meltzer.

“I have worked directly with David as guest judge and mentor on 2 Minute Drill, and I am truly excited that he will be producing shoppable e-sports and business entertainment content for verbTV,” said Rory J. Cutaia, CEO of VERB. “David has a remarkable history of sports and business acumen, matched only by his extensive contacts and relationships in the sports, business and entertainment industries, all of which will serve as a basis for his content development initiatives. We expect this will be the first of many partnerships VERB will announce as we continue to build a library of shoppable programming for verbTV. Over the last several years, we have talked repeatedly about the forthcoming convergence of online shopping and entertainment, and our intention to be at the forefront that new paradigm. With verbTV, we are delivering on that promise. We believe these new innovations will create tremendous long-term value for our Company and for all our stakeholders as Verb becomes not only a significant force in the SaaS space, but a leader in live-selling e-commerce through Marketplace and verbTV.”

About David Meltzer
David Meltzer is the Co-Founder of Sports 1 Marketing and formerly served as CEO of the renowned Leigh Steinberg Sports & Entertainment agency, which was the inspiration for the movie Jerry Maguire. Considered one of the top esports entrepreneurs and investors, David is also a three-time international best-selling author, a Top 100 Business Coach, and host of the top entrepreneur podcast, The Playbook.

David is the Executive Producer of the Bloomberg and Amazon television series 2 Minute Drill and Office Hours. He is also the executive producer of Entrepreneur’s #1 digital business show, Elevator Pitch. David is featured in many books, movies, and TV shows such as World’s Greatest Motivators, Think and Grow Rich: The Legacy and Beyond the Secret, airing on Netflix. Additionally, he has been recognized by Variety Magazine as their Sports Humanitarian of the Year and awarded the Ellis Island Medal of Honor.

DRINKS and Shopify Partner to Power the…

SequenceShift and Omningage Announce a…